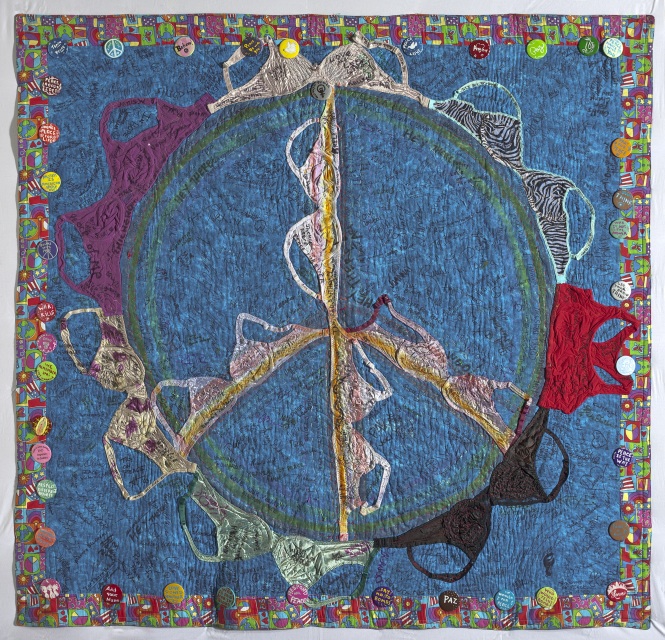 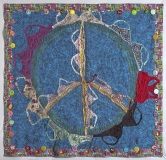 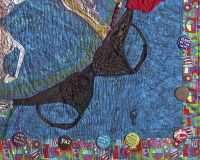 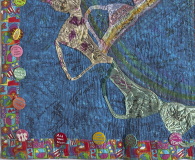 Shipping and insurance not included in price

Methods: Machine and hand quilted and hand painted. The background was left blank to gather signatures and comments from the beginning of the war until the end.

Artist Statement: At the beginning of the Iraq war in 2003 I wondered how many women were on active duty and yet it was rare to hear news reports making mention of them. I personally knew of several women serving in Iraq. I wanted to think of a way to say that women are participating and losing their lives alongside the men. Specialist Lori Ann Piestewa, a native woman, lost her life with only a brief mention in the media. Women are risking their lives on our behalf and many lost their lives in the Iraq war. I wanted to bring attention to this inequity. I decided to create a tribute quilt. I use my art as a form of activism. It’s a method to get the public’s attention, bring community together in dialog and educate on marginalized issues. I wanted this quilt to do just that with regard to this issue.

My Grandmother always told me that a bra is a foundation garment. So what better way to visually speak about women than to use the image of a bra. I joined the bras together to form a Peace symbol. On the battlefield or as civilians at home, we remember them, honor them, and love them.

This work contains signatures and comments from individuals who believe in the concept of peace at home, among diverse community members, and with others around the world.

While the majority of the signatures are from Arkansans, they are also from people across the United States. These people were from all walks of life. There were artists, poets, activists, students and people from every generation. The comments and signatures were gathered over the years of the war at peace events, art exhibits, and women’s gatherings. The oldest person signing was 89 years of age at the time. Her name was Eve and she was a nudist living in Florida who was attending a women’s studies celebration. The youngest was my grandson, Domenic in Texas, who was four when he signed.

History: Various universities, non-profit and community organizations and events around the U.S. to gather signatures and comments.

Hanging:  Each work has a sleeve on the back to hang the work. It can be hung on a wooden slat flat against the wall or on a curtain rod. After purchase I will send hanging and care information. Works can also be framed if you choose.